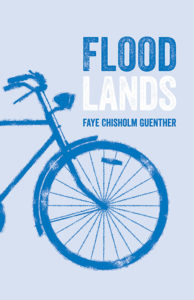 The launch of Faye Chisholm Guenther’s Flood Lands is upcoming in July, and we hope to see you there. Please see below the details from the Facebook event announcement for the launch.

In poems, and a short story set in the near future, Flood Lands traces the immediate aftermath of an environmental catastrophe that has threatened a village and the people who live there.

Flood Lands is also about the unsettled: waiting in and on something, the texture of apprehension, our breathing in a space of what could happen next.

Faye Chisholm Guenther is a Toronto-based writer. Her short fiction has been published in literary journals including Joyland and Plenitude. She has a PhD in English from York University specializing in modern and contemporary American literature, and gender and sexuality studies.

The evening will be hosted by Alejandra Ribera, a long-time friend of Faye’s. Alejandra Ribera is an award-winning songwriter, and an NPR and CBC favourite, whose sophomore album is the critically acclaimed This Island. http://alejandraribera.com/

Faye will also be joined by special guest, Marianne Apostolides. The writer of six books, Marianne Apostolides is recipient of the Chalmers Arts Fellowship and winner of the KM Hunter Prize Award for Literature. Her most recent work is the surrealist memoir, Deep Salt Water (Book Thug). http://marianne-apostolides.com/

Copies of Flood Lands will be available at the launch and can be ordered online at Junction Books.